Posted at 11:11h in News from Quay Law, Newspaper & Other Articles by Lawyerinauckland 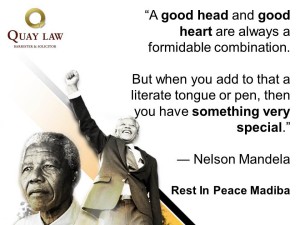 The anti-apartheid hero was admitted to a Pretoria hospital on June 8 with a recurring lung infection.

He was discharged on September 1 after nearly three months in hospital, but had been in intensive medical care at his Johannesburg home.
Mr Mandela – or Madiba, as he was affectionately known – was revered among most of South Africa’s 53 million people as the architect of the 1994 transition to multi-racial democracy after three centuries of white domination. 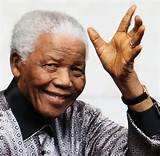 However his fourth hospitalisation in six months had reinforced a realisation that the father of the post-apartheid “Rainbow Nation” would not be around for ever.

On June 24 the government announced that Mr Mandela’s health had deteriorated from “serious but stable” to “critical”, causing a perceptible switch in the national mood, from prayers for his recovery to preparations for a fond farewell.

In the last few days hundreds of people have offered notes, flowers and prayers for Nelson Mandela at a wall surrounding the Pretoria hospital. Well-wishers’ messages, bouquets and stuffed animals piled up at the guarded boundary around the compound.

A section of the beige brick wall was plastered with notes of appreciation for his lifetime of struggle and sacrifice – including 27 years spent in apartheid jails – that helped lead to the country’s first all race election in 1994.

School children, prayer groups, office workers together with comrades and supporters who followed Mandela in the anti-apartheid fight have trickled past the hospital day by day, passing a gauntlet of journalists and camera crews camped outside the main gate.

Police shut off streets to vehicle traffic near the hospital in the centre of the capital.

And AFP reported that an elder in Mr Mandela’s clan had confirmed he was on life support.

President Zuma said doctors were doing their best to ensure the “recovery, well-being and comfort” of South Africa’s first black president and he urged the people to keep Mr Mandela in their thoughts and prayers.

The public’s last glimpse of Mandela was a brief clip aired by state television in April during a visit to his home by Mr Zuma and other leaders from the ruling African National Congress.