12 Mar Mortgage refinance | To Fix or to Float?

Posted at 14:49h in Auckland law firm LEGAL TIP of the Week by Lawyerinauckland

When considering mortgage re-finance the ultimate question is to fix or to float?  Please find an article below, sourced for your by the conveyancers and Auckland solicitors at Quay Law.  This article appeared in the NZ Herald on 12 March 2014.

The cash rate is likely to rise, so experts say assess what you can afford and lock it in. 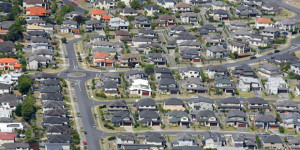 Some people were weighing up the cost of getting a valuation done on their house to try to see if they could improve their equity position and get a better rate. Photo / Chris Gorman

Mortgage brokers are urging borrowers to fix the interest rates on their loans and say it’s not too late despite an expected increase in the official cash rate tomorrow.

The Reserve Bank of New Zealand is widely expected to increase the rate from 2.5 per cent to 2.75 per cent after years of being on hold.
Floating interest rates and short-term rates of less than 18 months are expected to rise with the cash rate, pushing the standard floating rate from around 5.75 per cent to 6 per cent.

Mortgage broker Bruce Patten said he had seen a rush of people wanting to fix loans in the past three weeks.

“Every man and his dog is scrambling to either fix rates or break their existing rates.”

Mr Patten said the biggest factor people should take into account when deciding whether to fix or float their mortgage was affordability.
“People need to understand what rate they can afford. If they can afford to pay 6 per cent now lock it in for three years.”

Mr Patten said most people favoured fixing their mortgage for two years but his view was that it was better to go for three years to give a bit more “breathing room”.

The official cash rate is expected to increase by a full percentage point to 3.5 per cent by the end of the year which could send floating rates to around 7 per cent.

Broker Karen Tatterson, a board member on the Professional Advisers Association, said it was not too late to fix now.
“People still have a chance to fix on Thursday or Friday.”

Ms Tatterson said most banks would give a 24-hour timeframe for a customer to go with a rate when it was offered.

She said the best rates to fix on were two and three-year rates.

Ms Tatterson said it was still possible to negotiate interest rates with banks but those with a deposit or equity of less than 20 per cent had little chance of getting a better rate.

Some people were weighing up the cost of getting a valuation done on their house to try to see if they could improve their equity position and get a better rate.

But she said fixing was not right for everyone.

Those who were expecting to move house soon or expecting a lump sum payment could be better off floating or having a portion on floating.